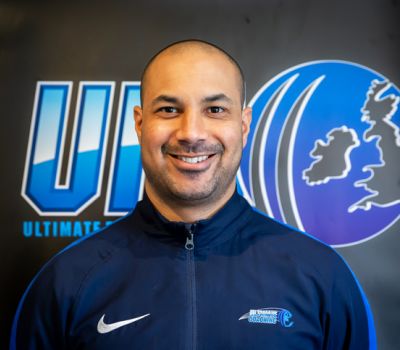 David Meek has always had an interest in sports but his main passion is for football. At a young age David always dreamed of being a footballer as most young football fans do. He left school not knowing what to do but wanting to be involved in football so decided to follow the path to becoming a football coach.

David has had much experience within football coaching, working at Fulham Foundation and Crawley Town in the Community, which gave him skills not just in coaching but working with young children. David managed grassroots teams from ages U8-U15s so gained valuable experience working on the admin side of football finding out all the hard work that coaches/ managers/ volunteers do behind the scenes. This goes mostly unseen, so was an eye-opening time and increased his desire to work harder within football coaching at a grassroots level to help players and teams to develop. Working in schools David has seen the value of having fun while learning to young learners, and creating an enjoyable experience to all young children regardless of their ability is essential. David particularly enjoys coaching, seeing and hearing young players take on what they have been taught in a training or development session, and giving them valuable information to help them improve. Watching the development of his players over months/years has been the main reason why David enjoys coaching.

David is Head of Coaching at Ultimate Coaching, overseeing and supporting coaches to develop, as well as engaging more players into football or sports in schools. Working with great coaches is also a great opportunity to learn from them and share his ideas, and there is a real feel-good environment within Ultimate Coaching where all the coaches are friendly and approachable.

David’s role outside of Ultimate Coaching is also at Sutton United FC where he is Deputy Head of the Girls’ section which is becoming stronger and growing each year. Having coached one of the girls’ teams at Sutton for a few years, David has witnessed the growth of girls’ football not just in Sutton but in Surrey, and has been amazed by the amount of girls now getting more involved in football. He is very keen to get more girls involved in football through Ultimate Coaching but feels it is just as important for girls to get more involved in sport overall, not just for the health and physical benefits but also the social side.